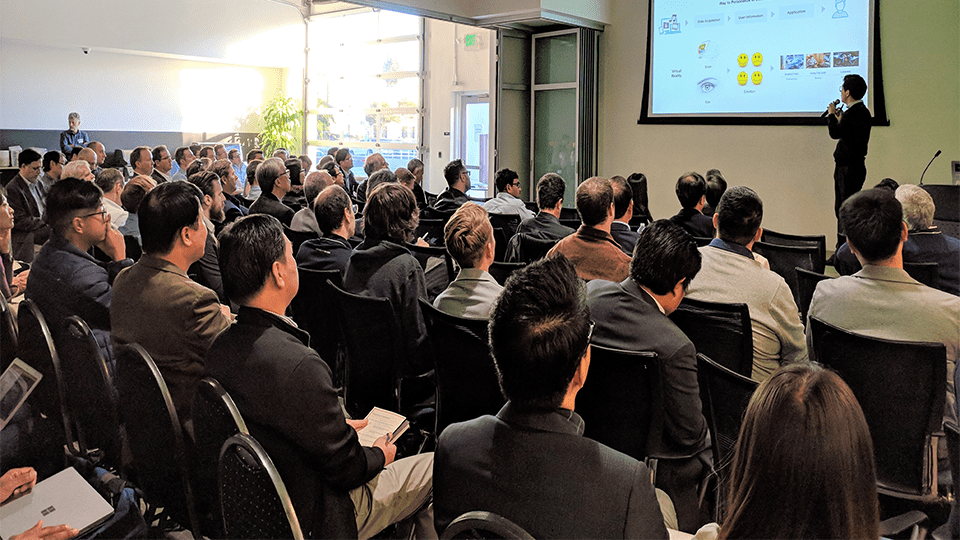 SKTA Innopartners hosted its 2nd Demo Day this year on November 7, 2017.  The event showcased a mix of US emerging technology startups vetted by SKTA Innopartners, as well as startups currently incubated by SK Telecom at the Daejeon Center for Creative Economy & Innovation (CCEI) in South Korea. The event was also a collaboration with the Telecom Infrastructure Project (TIP), an international consortium focused on engineering focused initiatives in telecom sector, where TIP introduced a select number of startups under their ecosystem acceleration centers (TEAC) sponsored by SK Telecom, British Telecom and Orange.  The innovative startups span across core technology sectors including IoT, AI, Drones, Optical Devices, Cybersecurity, Autotech, Space Communication, Computer Vision and more.

Each startup was given 7 minutes to present their business followed by 3 minutes of questions and answers. The event provided a platform for these 19 emerging companies to demonstrate their products and network with over 150 investors, corporate partners and the startup community.  SKTA looks to expand its investment and corporate partnership ecosystem through more proactive collaboration, strategic initiatives and co-investment opportunities in core technology based startups around the world.

To further discuss about collaboration and investment opportunities with SK Telecom Americas Innopartners, please contact us at innopartners@skta.com

Presenting Companies (US and CCEI)

CCEI is an effort by the South Korean government to boost domestic economy and to build an innovation ecosystem around the country. 17 Centers have been opened, including Daejeon, which is seen as a perfect hub for open innovation, startup incubation and ecosystem building. The Daejeon CCEI is being supported by both the South Korean government and SK Group.  Under the program, each startup receives US $20,000 as startup capital and US $200,000 for technology development. Startup also gets a chance to attract investments from SK-KNET fund and Daejeon “angel” fund. To date, the Daejeon CCEI has supported 337 companies in attracting investment, developing marketing strategies and extending their businesses abroad.